Become a Patron!
Become a Patreon (link above) to follow all things Clownlife- with access to Zuma Puma comedy videos, articles, online courses, meditations and discounts on future Clownlife workshops and more. ​​​ 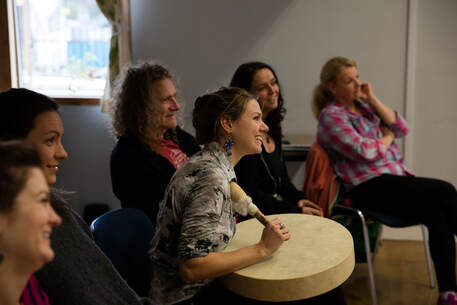 Facilitator Bio:
Zuma Puma aka. Nelly Scott is a Canadian performer and the founder of Clownlife courses merging the work of Clown and personal development with a focus on how the studies of Clown can positively influence ones life and artistic practice exponentially.
Zuma has facilitated over a thousand Clownlife participants over the years in 14 countries across the UK, Australia, Europe, South, Central and North America. Teaching in universities, colleges, theatre companies, corporate settings, artistic residencies and retreats, online and the list goes on.
She is most well regarded for her work founding the International Lost Cabaret- London's most alternative comedy night since 2012. The weekly Comedy cabaret took on its own life and grew into a collective initiative with a manifesto to support contemporary alternative comedians push the boundaries to create new works, some have garnered great success with Netflix specials and International awards. The Lost Cabaret comedy nights are now showcasing comedians regularly around the world in; London UK, Melbourne Australia, Sydney Australia and Paris, France.

Training:
Zuma has 12 years of extensive clown training with over 40 international clown facilitators and intensive full time training with some of the world’s most renowned clown schools including- L'Ecole Philippe Gaulier (1.5 years, Paris France) L'Ecole Du Comedy Et Clown run by Francine Cote of Cirque du Soleil (1 year training, Montreal). She trained in Clown Through Mask, Pochinko style (Canadian Clowning) with Sue Morrison in Toronto, Phil Burgers also known as Doctor Brown and the list goes on.  After moving to the UK she completed 4 years of training with over 25 Leading European Clown teachers at London's Advanced Clown Camp (A training programme she co-founded in 2012 with fellow Gaulier students in the UK). As a collective the core group of the London Clown Camp invited international clown facilitators to teach 6 week long courses, exploring the broad and dynamic aesthetics of clown from Theatre to Circus to Busking Clown and beyond.
Besides her training in Clown Zuma holds a keen interest in personal development, she trained with Bristol NLP to obtain her Neuro Linguistic Programming Master Practitioner certification. She has dedicated herself to a range of personal developmental programmes throughout her life as well as apprenticing a number of spiritual teachers and shamanic practitioners; in process work, energy healing, holding ceremony, rites of passage initiations, ritual performance, vision questing and solos, mindfulness and nature connection.

Research and Performance:
Aside from her extensive clown studies Zuma has committed years of her life to physically researching a broad range of clown aesthetics which differ from country to country and from street to circus to theatre.  Zuma spent 3 summers touring with Bread and Puppet a political circus puppetry company based in Vermont, USA which has largely influenced her work in clown and conflict and performance activism, she is also a keen believer in The Bread and Puppet Manifesto which states that 'Art is food for the soul and should be as accessible as food', all of Zuma's work reflects this philosophy. Fascinated by the aesthetic of traditional circus clown, Zuma spent two years performing with Tickles and Co. in British Columbia, Canada- where she learned a great deal about 'The Gag' timing and the mainstream understanding of Clown (ie. big shoes, nose, make-up, gags & colourful costume).
After completing Francine Cote's Ecole du Comedie and Clown in Montreal (Canada) in 2012,  Zuma moved to London (UK) where she dove into her research of contemporary clown. Devising work every Friday with her audiences, the Lost Cabaret became Zuma's greatest teacher, uncovering the core philosophies and techniques behind contemporary clown after years of training. Over the 4 years she performed weekly at the Lost Cabaret, Zuma developed many shows with comedy partners and clown companies touring many European festivals including; The Edinburgh Fringe, Brighton Fringe, Leicester Comedy Festival, London Clown fest just to name a few. She then developed her solo touring show:  Don't Do it, Don't Do it, DO IT! which has toured 5 countries and counting, reaching standing ovations and fabulous reviews. Over the years she has toured 14 countries from North to South America and across Europe performing and teaching clown workshops in festivals, theatres, streets, communities, site specific locations, schools and Universities.

Personal Development:
Studying and researching clown can be an intense undertaking and for Zuma required a level of therapeutic and holistic measures to keep the heart intact. Since experiencing a near death event in her teens Zuma has been committed to personal development, her intrigue has led her to the guidance and mentorship of many elders and a number of apprenticeships with Swamis, Shamans and spiritual teachers from around the world. She has travelled deep into the jungles, vision quested in the mountains, lived without money for 3 months, lived only through trade for 6 months, has lived homeless in a shelter in the dead of winter (to further understand the state of the world), she has backpacked around the world and has performed solo for communities who have never seen a white woman, let alone a woman travelling on their own, she has fasted in the deserts and has sat in silence for 10 days in Vipassana retreats. After apprenticing Swami Baba in 2016 in the ancient traditions of Ayervedic Agni Hotra Fire Ceremonies, she sat every sunrise and sunset for 3 months in fire ceremony. Zuma then went on to facilitating full time at Present Moment Retreat centre in Troncones, Mexico for 6 months- where she held fire ceremonies, ritual performance, re-patterning the mind workshops and Clownlife play for personal development in life and the arts. Continuing her work to coach and facilitate others she went on to train in Neuro Linguistic Programming and became a master practitioner in the fall of 2018.

Pedagogy (The Art of Facilitation):
"Clown is an incredible tool to get to know the self; how we treat ourselves, how we treat others, our coping mechanisms, our short falls, our beauty, our humanity, our unique nature. For me, Clown is the vehicle to living whole heartedly and the destination is becoming the change we wish to see in the world.
One can learn clown to develop performance techniques; to get the film gig, devise the show, win awards and strive for big dreams of 'success', my question is what is 'success' if your heart, your spirit, your soul aren't behind you?  Mental health is of big concern in the comedy community, I've seen many performers driven to pieces by the harsh realities of the entertainment industry (including myself). My objective as a facilitator is beyond introducing you to clown as a means of furthering your repertoire as an artist, it is to introduce you to something bigger.
What one could find in their process with clown is a deepening in themselves, in their relationship to others, meeting the ridiculousness of their human nature and how they as individuals influence the world. How can one take ownership of ones actions and words, to go through conflict and not run away from it? How can one heal and challenge ones self and the world through art, through performance? These enquiries are what fuel my research and work.
My mission as a facilitator is to connect participants to their true nature, to a deeper understanding of themselves and how they can bring all of these insights into their artistry. To express fully, to laugh, to cry to be human and to search for the ridiculous in who we are and how we are. To model what it is to live in a supportive artistic community, where we are challenged, truthful and real and yet nourished, supported, connected and seen- this is the world I'd like to live in... and so it is!" - Zuma aka. Nelly Scott

Interviews and blogs (click the buttons to read the articles) 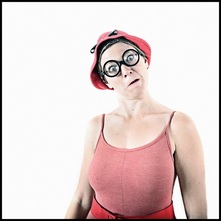